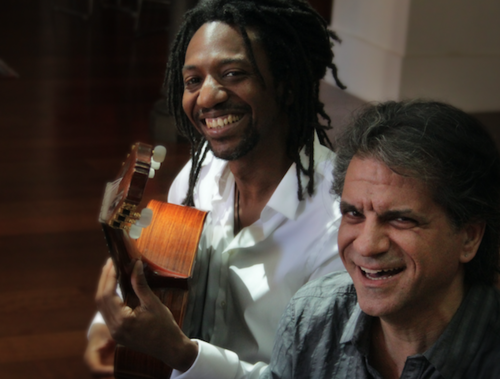 February 12, 2019
The Hellenic Studies program, along with the Council on Latin American & Iberian Studies, and the Council on European Studies, is proud to announce a night of Greek-Cuban jazz with master musicians Spiros Exaras and Elio Villafranca. The concert will be held Saturday, February 16 at Sudler Hall at 6 PM, and is free and open to the public.
A graduate of the Athens Conservatory of Music with degrees in classical guitar and composition, Spiros Exaras is an internationally acclaimed musician, regarded as a master of fusing musical cultures. In his native Greece, Spiros has been a featured player with the Greek National Radio Television Orchestra (ERT) and the Orchestra of Colors, as well as working with such legends as Yannis Markopoulos, Marios Fraggoulis, and Kostas Hatzis.
Internationally, Spiros has played with such artists as Shirley Bassey, Mark Murphy, Randy Brecker, Jon Benitez, Matt Garrison, Ray Vega, Tessa Souter, J.D. Walter, and Joel Rosenblatt as well as Grammy Award-winners, Dave Valentin, Hernan Romero, and Arturo O’Farrill. Exaras played the searing guitar solo on Mariah Carey’s platinum hit, “My All.” His film and theater scoring includes Everything For a Reason, Niko’s Restaurant, the plays Gallathea, and The Hand And Hen, in addition to numerous commercials.
Born in the Pinar del Río province of Cuba, Steinway Artist pianist and composer Elio Villafranca was classically trained in percussion and composition at the Instituto Superior de Arte in Havana, Cuba. Since his arrival in the United States in mid-1995, Elio Villafranca has been at the forefront of the latest generation of remarkable pianists, composers, and band leaders. Last year, Mr. Villafranca was among the five pianists hand-picked by Chick Corea to perform at the first Chick Corea Jazz Festival, curated by Corea himself at Jazz at Lincoln Center. He also received a 2010 Grammy Award Nomination in the Best Latin Jazz Album of the Year category.
In 2008, The Jazz Corner nominated Elio Villafranca as pianist of the year. That year, Mr. Villafranca was also honored by BMI with the BMI Jazz Guaranty Award and received the first NFA/Heineken Green Ribbon Master Artist Music Grant for the creation of his “Concerto for Mariachi, for Afro-Cuban Percussion and Symphony Orchestra.” Finally, his first album, Incantations/Encantaciones, featuring Pat Martino, Terell Stafford, and Dafnis Prieto was ranked amongst the fifty-best jazz albums of the year by JazzTimes magazine in 2003.
Over the years Elio Villafranca has recorded and performed nationally and internationally as a leader, featuring jazz master artists such as Pat Martino, Terell Stafford, Billy Hart, Paquito D’Rivera, Eric Alexander, and Lewis Nash among others. As a sideman, Elio Villafranca has collaborated with leading jazz and Latin jazz artists including Wynton Marsalis, Jon Faddis, Billy Harper, Sonny Fortune, Giovanni Hidalgo, Miguel Zenón, and Johnny Pacheco among others. He is based in New York City, and he is currently resident professor at Temple University in Philadelphia.