The Program for Hellenic Studies under the umbrella of the European Studies Council at The MacMillan Center supports and coordinates the study of post-Antiquity Hellenic culture and civilization. Established in July 2001 with the generous support of the Stavros Niarchos Foundation, and from 2007 onwards funded by the Stavros Niarchos Center for Hellenic Studies at Yale, the Program organizes lectures, symposia, conferences and supports faculty and student scholarly activities, as well as cultural events. The Program of Hellenic Studies offers a comprehensive program of instruction in the modern Greek language at the elementary, intermediate and advanced levels and cooperates closely with the Center for Language Study at Yale University for the development of technology-based teaching aids for the acquisition and mastering of modern Greek and the enrichment of other Hellenic oriented courses. In addition, the Program offers a variety of courses in modern Greek literature and culture as well as in Ottoman and modern Greek history providing students with the opportunity to study post-classical Greece in a broad geographical, historical, and comparative context. The Program also fosters courses in other departments, including Byzantine history and Byzantine history of art.

New Center at Yale To Support Study of Greek Heritage and Culture. 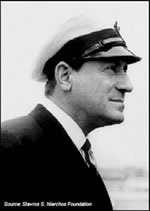 Stavros S. Niarchos understood the meaning of thinking and acting globally long before the term globalization became so prominently used in public policy and economics.

His business operations began in Greece, the country of his birth and heritage, yet his accomplishments were notable worldwide. He was considered to be one of the most successful businessmen of the twentieth century.

Although known predominantly for his shipping business, Niarchos’s diversified financial activities were at the core of global industry from the time he formed the Niarchos Group in 1939 until his death in April 1996. His legacy continues into the twenty-first century with the establishment, upon his death, of the Stavros S. Niarchos Foundation. Committed to working in Greece and internationally, the Foundation derives its mission from Niarchos’s keen instincts and interests in providing access to opportunity in the fields of education, social welfare, health, and arts and culture.

Stavros S. Niarchos was born July 3, 1909 in Athens. He studied law at the University of Athens and began working in 1929 in his family’s grain business. He soon convinced his family that it could save money by owning the ships that provided the transportation. The first six freighters were bought during the Great Depression.

While Niarchos served in the Greek Navy during World War II, the Allied Forces leased his first vessel. Niarchos participated in the Allied operations in Normandy and was awarded the Order of the Phoenix, the Royal Order of King George I, and the Royal House Order of SS George and Constantine, among other distinguished service medals. After the destruction of his vessel, he used the insurance funds to buy six oil tankers. Thus began the emergence of Stavros Niarchos as a significant participant in the world of international commerce.

In 1956, less than twenty years after creating his own firm, Niarchos agreed to build and operate the Hellenic Shipyards, the first such private investment in Greece. Known as the Skaramanga Yard, it employed over 6,000 skilled workers and rapidly became the largest Mediterranean shipyard for repairs and new construction. Niarchos’s business philosophy in shipping was to buy and build big; his supertankers set world records for size and carrying capacity. For many years he owned the largest private fleet in the world. At its peak, his shipping company operated more than 80 tankers.

Stavros Niarchos recognized the importance of having a global strategy early in his career. His vision enhanced his business and investment successes and contributed to the quality of his many exceptional collections. The family members and business associates charged with executing his philanthropic goals use the lessons and capital from his achievements to direct the Foundation’s activities in Greece and throughout the world. By designating a significant part of his estate to establish the Stavros Niarchos Foundation, Niarchos created an enduring commitment to enriching the lives of others around the world.

Previous Lectures in the Series

September 13, 2016
Peter Frankopan, Professor of Global History and Director of the Oxford Centre for Byzantine Research, University of Oxford
“Change in the 21st Century and the Return of History”

September 21, 2015
Nanno Ourania Marinatos, Department of Classics and Mediterranean Studies, University of Illinois at Chicago
“Akrotiri at Thera and its Reception: A brilliant culture buried by Post Modernism”

September 30, 2013
Paschalis Kitromilides, University of Athens
“From Empires to Nations: Transitions in the Historical Experience of Southeastern Europe”

January 26, 2010
Daniel Mendelsohn, Author and Critic
“Cavafy’s Poetic Evolution: From the Center to the Periphery, From Mediocrity to Greatness”

September 30, 2004
Roderick Beaton
Koraes Professor of Modern Greek and Byzantine History, Language and Literature, Kings College
“A Continent as Big as China: Hellenism in the Life and Work of George Seferis”