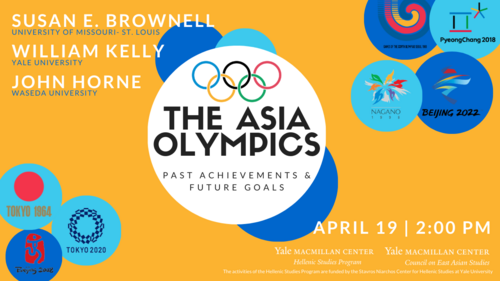 On April 19, students and professors from around the world gathered virtually on Zoom for a webinar about “The Asia Olympics: Past Achievements & Future Goals” sponsored by the MacMillan Center’s Hellenic Studies Program at Yale. The event, cohosted by the Center’s Council on East Asian Studies, was open to the general public.

Moderated by Professor George Syrimis, Director of the Hellenic Studies Program, the panel discussion covered the history of Olympic Games held in East Asian nations as well as controversies surrounding the hosting of the Games in Asia in the near future. Syrimis said that the aim of the event was to weigh the impact hosting the Games has had on athletic culture and society in Japan, China, and South Korea and to assess the legacy and current state of Asian Olympism. “The current travails of the Tokyo Olympics were the catalyst for us to have a broader discussion about the modernity of the three nations through the prism of their Olympic traditions,” he said.

The panel featured professors from universities around the globe, including Susan E. Brownell, professor of Anthropology and Archaeology at the University of Missouri- St. Louis, William Kelly, Chair of the Department of Anthropology at Yale, and John Horne, Professor of Sport and Social Theory at the Waseda University’s School of Sport Sciences in Tokyo.

Kelly began the presentation by speaking about the Tokyo 1964 Olympic Games and the geopolitical agenda of Japan at large in hosting the 2020 Games this summer, which he dubbed as “the viral Olympics.” Horne continued the discussion of “Tokyo 2020ne,” reviewing the pros and cons of hosting the postponed Games. Brownell concluded with the emerging criticism of the International Olympic Committee (IOC) decision to allow China to host the 2022 Winter Games that points to the country’s human rights record.

A live question and answer session with the panel’s virtual audience followed the presentation. Questions from the attendees encompassed topics ranging from the hosting of the Olympics’ youth counterpart in Asia to the effectiveness of boycotts and public organizing in changing outcomes related to the Games. In her presentation, Brownell said that the post-Cold War consensus of boycotts is that they “don’t accomplish political goals and harm athletes.” According to Syrimis, Horne was originally going to speak on why the Beijing 2022 Games should be boycotted.

Students of Professor Syrimis’s undergraduate history seminar on “Olympic Games, Ancient & Modern” were part of the panel’s virtual audience. In recent weeks of class, the students have discussed politics, violence, and boycotts at the 1972 Munich and 1980 Moscow Games and how that informs the understanding of current political tensions surrounding the postponed Tokyo 2020 and upcoming Beijing 2022 Games.

One topic the students have debated is whether or not the IOC should cancel the 2020 games due to coronavirus risks. “Ultimately, I think the [2020] Olympics probably should be held, with limited fans. Athletes who were supposed to compete last year may not be able to compete three years from now,” said Bryan Oliveira ‘21.

“The experience of hearing the world of theory and discourse behind something so many of consider simply a sporting event was incredibly fascinating. The speakers were so eloquent, and I definitely gained a deeper understanding of how much work goes into the event.” said Angela Perez ‘24.

A full recording of “The Asia Olympics” webinar and the ensuing Q&A session can be found on the Yale Hellenic Studies Program’s YouTube page at this(link is external) link.