The Hellenic Studies Program, at Yale University, announces a series of events that addresses the cultural, social, political and academic aspects of Hellenism from late antiquity to today. Many of this year’s events are loosely structured under general title “Beyond Greece” and are a continuation and elaboration of our series of events entitled “Crossing Borders: Literary Exploration in Greece and Beyond.” The aim of the events is to highlight the diachronic diffusion and cross-cultural interactions of Hellenic culture with adjacent or distant societies. By focusing attention beyond the geographical limits of the modern Greek state, the events aim to bring to the foreground the richness and, on occasion, the challenges and problems of such cultural centrifugal cross-fertilizations. Events include an ancient Greek play in New York City, the dissemination of Greek cuisine, a Greco-Italian concert, two films and two lectures on the Greek diaspora communities in America and Australia, as well as a series of lectures entitled “Greeks and the East,” which examines intellectual and artistic interactions between Greek communities and their Eastern neighbors. 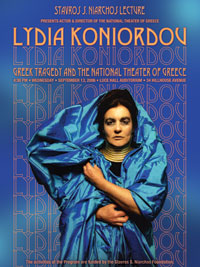 “Greek Tragedy and the
National Theater of Greece”

By popular demand, the world-renowned National Theatre of Greece returns to New York City Center (September 16-20)!  The Persians (Persae) is the oldest surviving play in history, and the only surviving Greek tragedy dealing with a non-mythical theme. The play celebrates the final defeat of the armies of Xerxes in the sea-battle of Salamis (480 B.C.). After it was performed in 472 B.C. in Dionysia, Aeschylus (who himself fought in that battle) was awarded the first prize. The play is not only a boastful picture of the Greek triumph over the Persians, it is solemn warning addressed to both victors and vanquished. It is a vision of divine justice humbling the pride of nations, a moral lesson on tyranny that touches the heart and conscience of each oppressor, whether Greek or barbarian. For more information you can also visit http://www.nycitycenter.org/

Signing Up: Please respond to Debra Christopoulos (debra.christopoulos@yale.edu, or at 432-9346) indicating the price range you prefer. Note that discounted prices depend on number of people interested so if less than 15 people sign up we will all need to pay full price.

Kopiaste!  Greek Food, Public Health and Policy I:
Scientific Evidence on Benefits of the Greek Diet

Greeks and the East Series

Dimitri Gutas, Near Eastern Language and Civilization, Yale University
“’We belong to the East:’ Greeks and Arabs Through the Ages”