Nutrition, Public Health and Filotimo in Greece: A Holy Trinity in Crisis 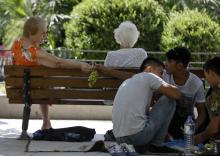 The impact of the recent financial crisis in Greece on what is inherent for the Greeks: food, health and sociability, is undisputed. As the country is trying to rediscover, reload, redefine and reposition itself in the European and global political, cultural, and economic milieu, old or rediscovered traditions and deeply-rooted cultural footprints such as filotimo are taking center-stage. Even though less attention has been lavished on the plethora of acts of generosity and hospitality by individuals and local communities, the evidence is overwhelming that in the midst of their own crisis the Greek have for the most part reacted by stepping in where the state and, more importantly, the European Union have failed. Numerous acts of selfless kindness abound from the shepherd in Lesvos who donates his daily milk production to migrant children to the octogenarian Athenian lady who unloads home-made food at Victoria Square, the neighborhood refugee camp. What these incident attest to is the fact that despite the strain on Greek society, an aspect of its social fabric, the one pertaining to hospitality, and, consequently, food and its consumption, remains intact and resilient.
The life expectancy in Greece has been attributed to the extensively-studied and well-established benefits of Greek nutrition. But in the Greece of late, issues related to nutrition are unavoidably affected and affect financial, economic and sociocultural parameters, as they translate to health costs, exclusive production rights, exports, tourism, etc.
This panel will attempt to address the impact of the financial crisis on public health in Greece and, in extension, the role of filotimo in the new Greek reality.