Watch: Russian Émigrés and their Impact in Interwar Greece 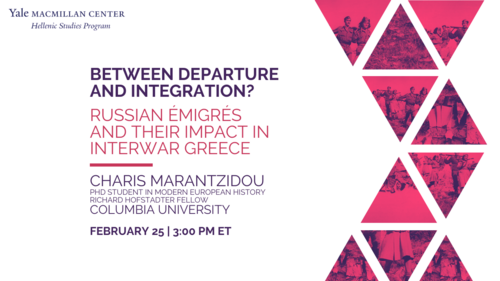 The victory of the Bolshevik Red Army over its opponents forced thousands of Russians to abandon their homes and pursue their lives in exile. Embarking on a long period of transit, former subjects of the Russian Empire spread across the five continents and established diasporic communities, known as Russia Abroad. This presentation will focus on one of the stops on their journey ––Greece––and will attempt to reconstruct the experiences of Russian émigrés in a country afflicted by its own refugee crisis.

Charis Marantzidou is a PhD student in modern European history and a Richard Hofstadter Fellow at Columbia University. Her research focuses on modern Russia and the Soviet Union with a particular interest in the communities of Russian diaspora in Europe. Before coming to Columbia, Charis completed a master’s in International History at the London School of Economics. She holds a B.A. in Liberal Arts from Sarah Lawrence College in Bronxville, NY.