Watch: The Greek Revolution and the Greek Diaspora in North America 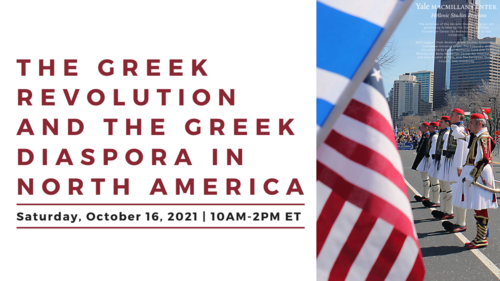 2021 marks the bicentennial anniversary of the Greek Revolution, the struggle against the Ottoman Empire. The ten-year war with the help of the Great Powers culminated in the establishment of the Greek state. The symposium will focus on the historical and cultural impact of the Greek Revolution for the Greeks in North America. The conference aims to document how North American Greek communities perceive and enliven this milestone of the modern Greek history. The symposium will also discuss its contemporary significance in the identity formation of those communities and the mechanisms by which they cultivate the memory of the revolution. The revolution is imprinted in every immigrant’s mind and serves as the foundational event of their collective identity. Internally, diasporic Greeks also identify with the specific region of their origins, but the commemorative events of the war remain the nexus of their Panhellenic cohesion. The symposium on The Greek Revolution and Greek Diaspora will offer both historical and contemporary critical reflections about the expectations and assumptions diasporic Greeks foster about their history. Scholars from several fields (history, folklore, anthropology, education, sociology, literature, film studies) will come into dialogue for a better understanding of the past and current importance of the Revolution, its evolution, accommodations, and adaptations as these come to bear on the identity of the Greeks in Diaspora.