Watch: Between Race and Ethnicity: Greek-America in the Times of Black Lives Matter 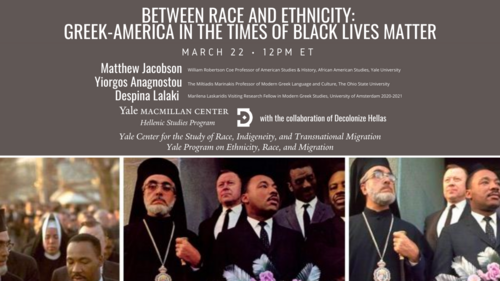 With ritualistic consistency, the Greek-American community commemorates Black History month with the iconic Times cover of Reverent Martin Luther King and Archbishop Iakovos at the entrance of the Brown Chapel African Methodist Episcopal Church. The Archbishop stares majestically down directly into the camera, marking his stance and status in the present, while Martin Luther king , head turned up and to the left, gazes into the future. It is a compelling and evocative photograph. There are other photos as well that show the two men in more intimate moments and sharing the same vision. The reactions of the Greek community were not so consonant. The Times cover, as iconic as it may be, is not the full picture.

In light of the recent Black Lives Movement and the wide support it enjoyed beyond the African American community and the world at large, this panel will discuss the history of Greek-American and African American relationships before and after and the Civil Rights movement and their current configuration during the Trump presidency and the Black Lives Matter movement in particular.